English commentary concerning the 8th of March 2021 in Finland

Due to the interest expressed by our foreign readers, and taking into account what may not be as clearly visible outside as it is looking from within Finland, we write this short commentary in English, focusing on what is most important and what requires clarification. (Suomeksi lukeville: selvitämme tässä englanniksi sellaisia seikkoja Kansainvälisestä naistenpäivästä Suomessa, jotka eivät välttämättä ole riittävän selkeitä ulkomailta katsoen)

Over a week after the International Women’s Day, we can read with joy the news and reports (see for example 1, 2, 3, 4) about various actions, manifestations, and even combative mass demonstrations from around the world, where revolutionary women shined in playing the leading role in going against the current. That meant going against both the state repression as well as the bourgeois and petty-bourgeois capitulation in service of the state repression. But so it was also for the red women since the early years of the 8th of March, which included factors varying from the First Imperialist World War to the Spanish Flu, and so it’s going to be until communism.

What needs to be underlined concerning capitulation in Finland: In Finland, the capitulation of the bourgeois and petty-bourgeois feminism on the 8th of March was 100% total. This is not an exaggeration or an approximation, but a confirmed absolute fact. We reported on various actions carried by revolutionaries in Finland prior to the day, holding firm on proletarian feminism and internationalism, despite that all the forces and factors commanded by the reaction were set against doing anything; especially the previously announced three weeks’ state of emergency that was declared to begin on the 8th of March exactly. 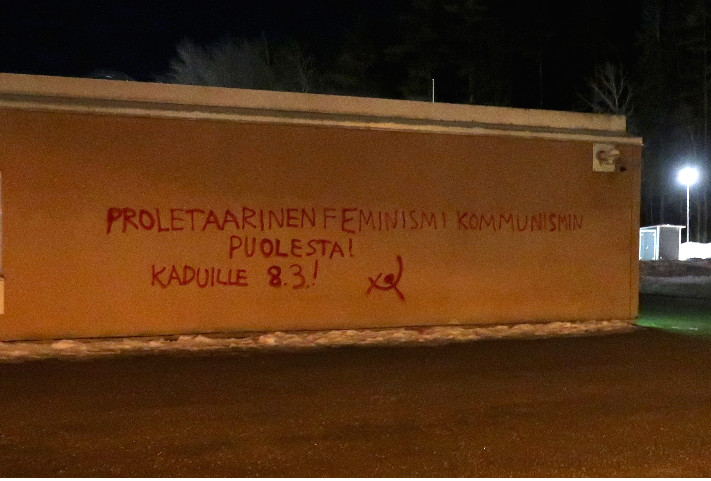 “Proletarian feminism for communism! To the streets 8.3.!” (Turku)

During the days prior to 8th of March, only the revolutionaries made clear they were going to join the International Women’s Day no matter what, while all previously active embodiments of petty-bourgeois feminism retreated to the internet. Except for the masses who were fortunate enough to see or receive the revolutionary propaganda in its various but still modest and quantitatively limited forms (see reports from Tampere and Turku), it could only seem as if the 8th of March was going to be cancelled in Finland.

According to the will of the reaction, the only mobilization taking place that day was supposed to be the military exercise of 4500 personnel carried out for two weeks in various urban centres, with one of them starting in the city of Tampere that very 8th of March. In sum, women were supposed to stay indoors and silent. That suffered a small but all the more significant rupture in Tampere, where (as already reported in English by Dem Volke Dienen) a contingent of revolutionaries took to the central square. There, fliers were distributed, a banner saying ”Against imperialism and patriarchy – for a revolutionary women’s movement” was mounted, behind which a strong speech was held loudly and clearly. 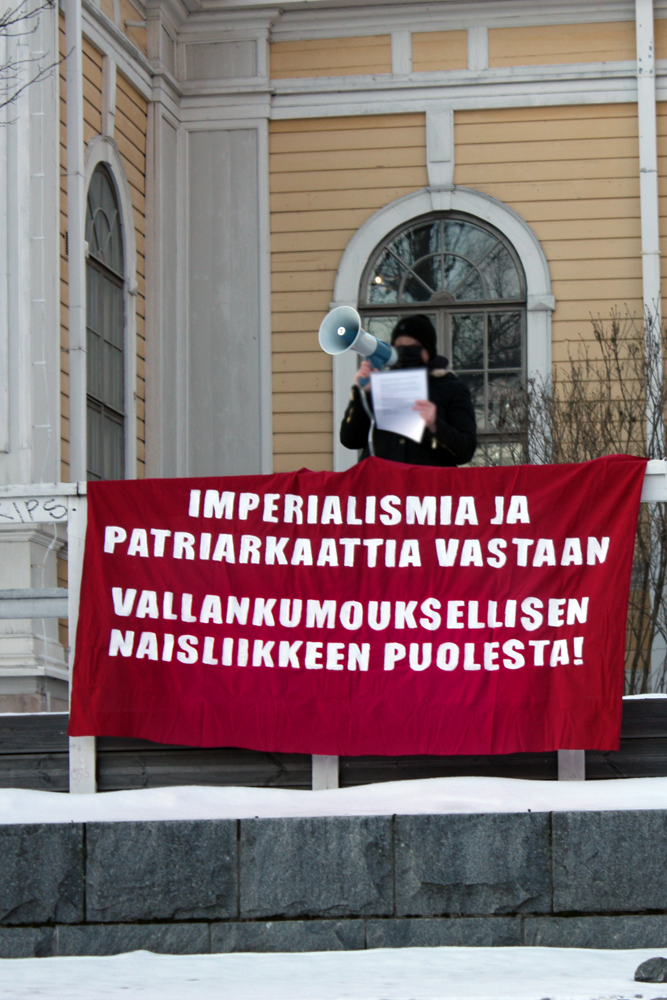 We reported the speech expressing, among other things, the justly stern words on the only internationalist stance;

“Today and especially today, on the International Women’s Day, women around the world are rising up to resist. We are also here today, because giving up struggle in these conditions would mean turning our backs to these struggling women masses of the world. It would mean lowly subservience to ever harder oppression and would condemn the women’s movement in Finland into the darkest national-chauvinistic servitude. By being here today, we stand side by side with the women’s movement struggling around the world”

This brings us to the next point that needs to be underlined; the very only voice in Finland in defence of the 8th of March and the women’s movement came from the revolutionaries. It stood above all of the capitulation, making an irreversible distinction between what’s genuine and what’s fake. This manifestation gave a clear message to the wide women’s masses, that they’re not alone and who really stands by their side, holding on relentlessly on the slogan: it is right to rebel! It’s the revolutionaries who strive to struggle irrespective of whether it’s permitted or “recommended” by the domestic imperialist and patriarchal state (“fatherland”), let alone easy or safe.

This entry was posted in Proletaarinen feminismi. Bookmark the permalink.