1st of May in Tampere 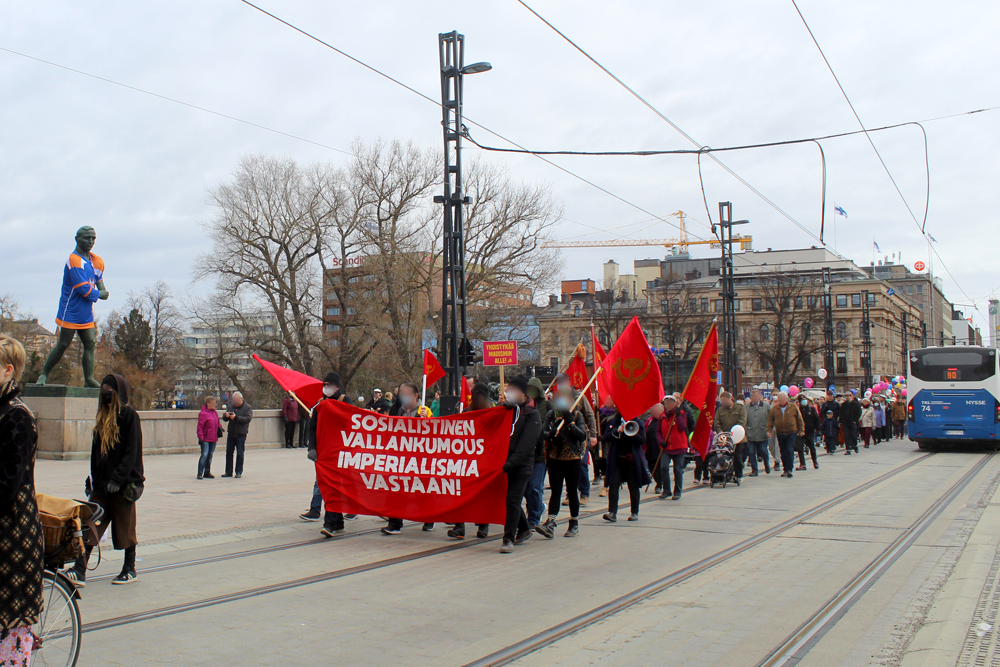 The international day of the proletariat in Tampere was very eventful and action-packed, and we can now, with bright class pride, publish this article composed on the basis of the reports and pictures we have received.

During the weeks prior to the 1st of May, revolutionaries distributed posters, such as a poster against NATO and Nordic military co-operation with the slogans of the joint statement, as well as a May Day mobilization poster. 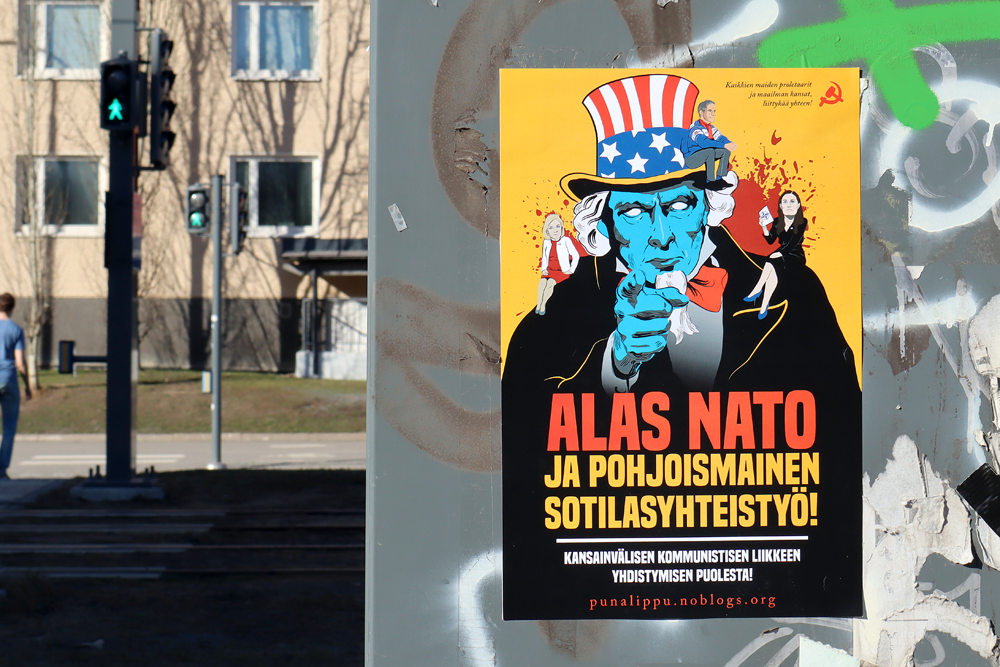 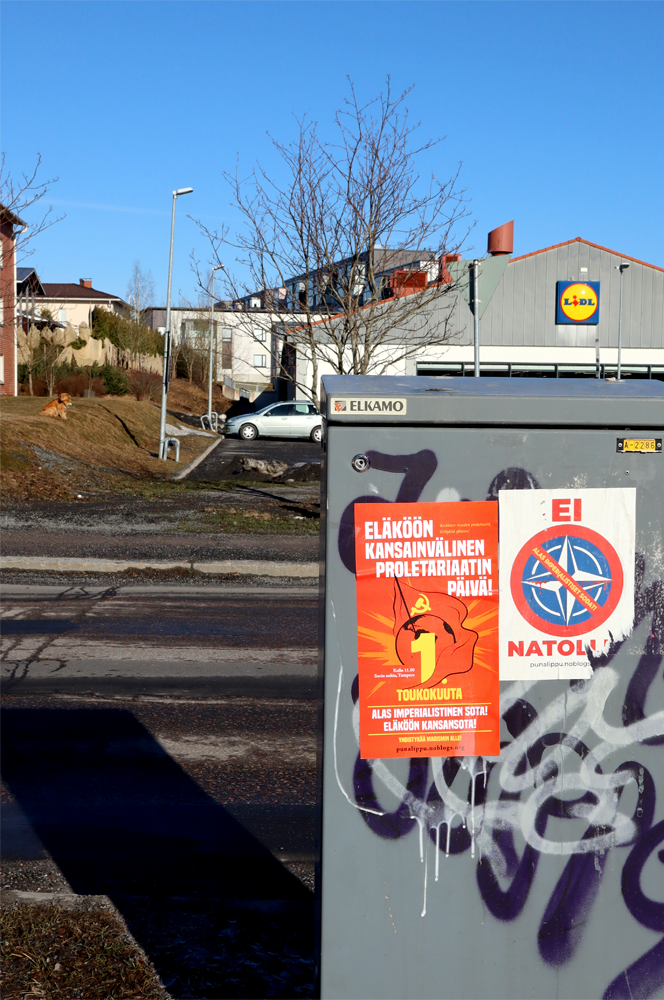 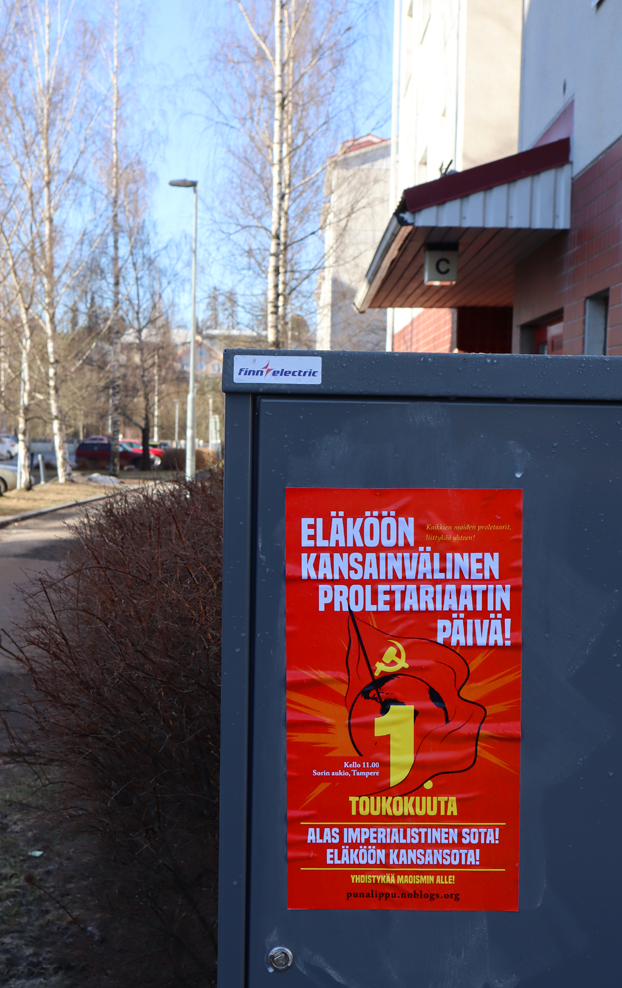 The traditional May Day march was seen also in Tampere after a pause of two years, to which revolutionares prepared for by distributing posters among other things. The day itself started in the early morning with a visit to the red mass grave at the Kalevankangas cemetery. Candles were lit on the monument, and a speech was held which strengthened enthusiasm and determination for the great day of struggle. 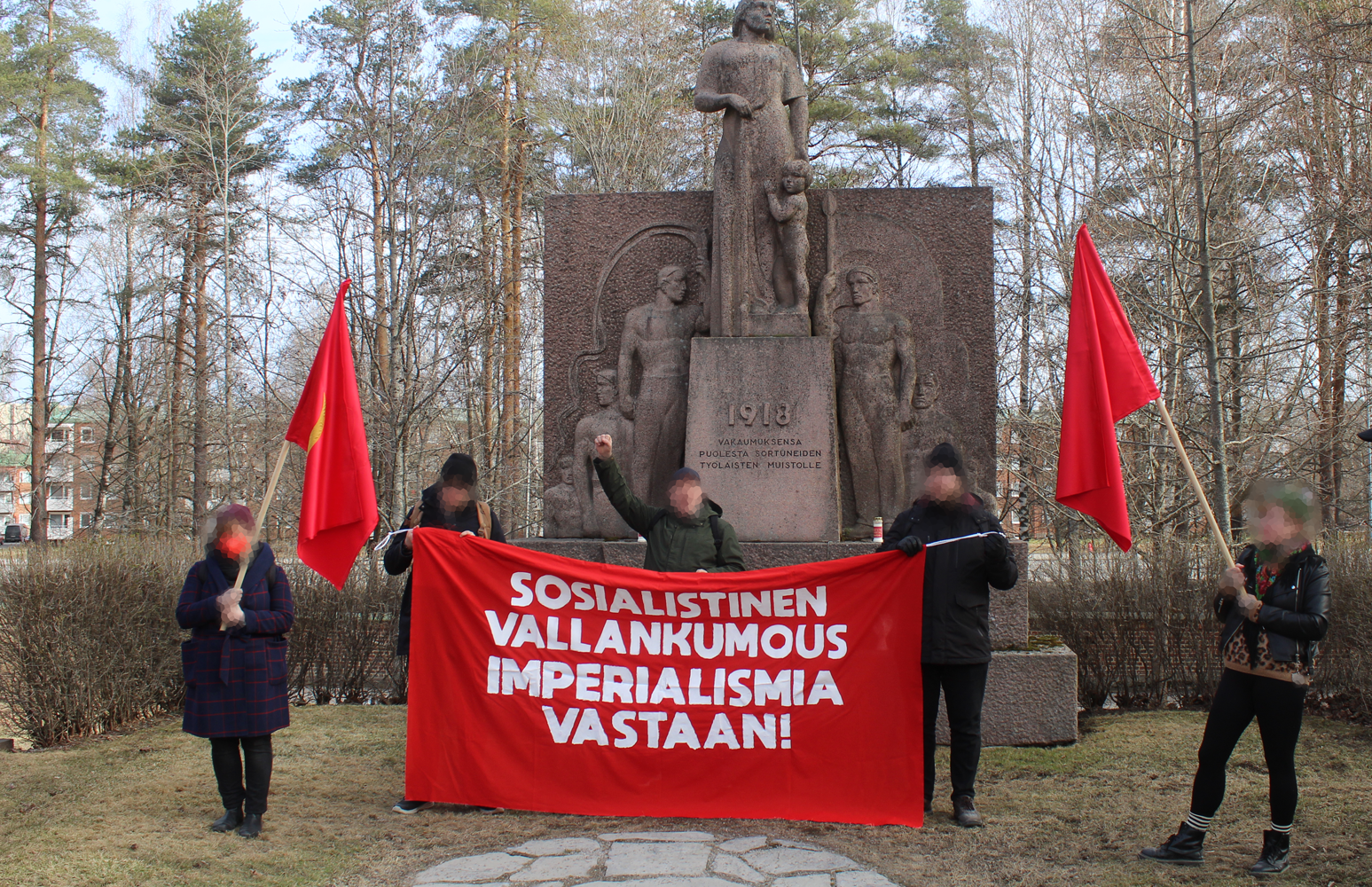 High point of the day was realized at the May Day march, where at least five hundred of workers and popular masses arrived. As in Helsinki, the organizers of the march were the governing parties Social-Democrats and the Left Alliance and the Central Organization of Trade Unions dominated by them. However, despite its record-breaking efforts, opportunism doesn’t have nearly the control over the working masses that it strives for, and thus flyers against NATO, among other things, were received with interest and even joy. A red bloc lead by revolutionaries was formed in the march, with its common slogan “socialist revolution against imperialism!” written on its front banner. This was followed by red flags, with hammer and sickle, and also a sign “unite under Maoism!”. The bloc was joined by a couple tens of people, with the more variable masses of hundreds forming the rear end of the march. 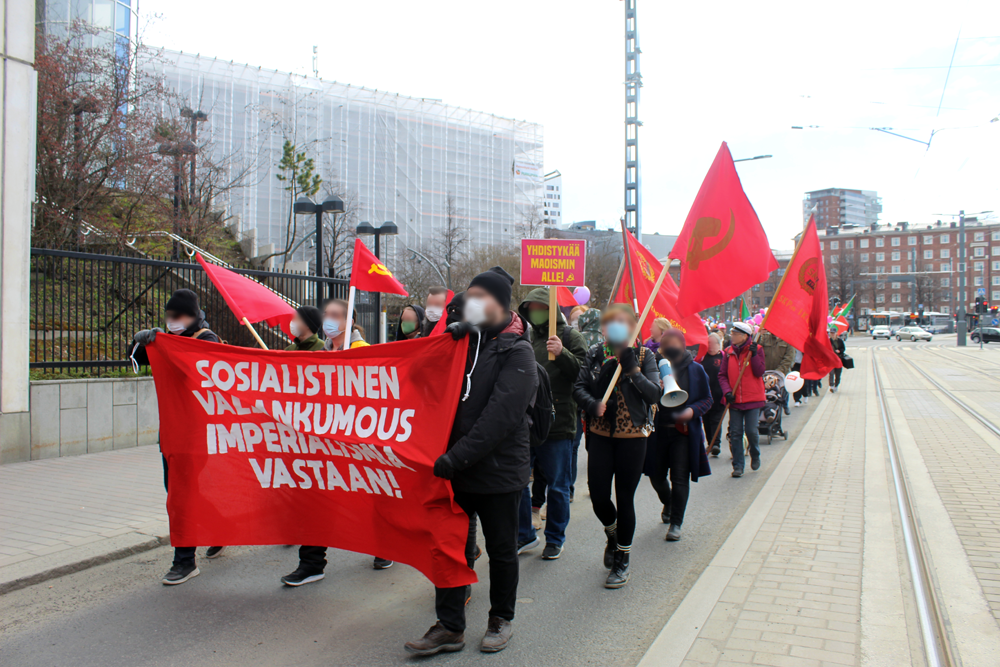 The red bloc went against the current, defying the worsening reaction. With the direction of the megaphone, during the whole march, shouts were echoed repeatedly, such as “not blue, not white – the 1st of May is red and international!”, “no NATO to Finland!”, “death to imperialism!”, “international solidarity, socialist revolution!”, and also were heard the May Day slogans from the International Communist Movement, “Long live the 1st of May, raise high the invincible Red Flag!”, “Down with the imperialist war! Long live the people’s war!”. In this way, the revolutionaries and the masses who had joined them, demonstrated to all, how should be the response to the assaulting reaction, which at the same time attacks against the workers’ right to strike, increases surveillance and militarism, especially by taking its state into the yankee-NATO with its villainous sprint, and in addition to all this, unleashing also the old-type of fascist movement. It must be responded by breaking the “fortress peace” of the enemy with combat and resistance, which shall be triumphant when it pushes on as part of the rising new wave of the world revolution, with the leadership of the reconstituted Communist Party of Finland. This powerful presentation at the May Day march was to receive a special affirmation later the same day in anti-fascist struggle.

After the march, revolutionaries went among the masses in various celebration events, preparing to protest the “White 1st of May” declared by the fascist “Blue-Black Movement”, the route and exact schedule of which was known in advance only by them and their masters’ repressive machinery. The name “blue-black” is taken directly from the fascist “Movement of Lapua” and its derivatives, referring to the period of time from late 20’s to 1944 when fascism raged in Finland, correctly defined by the Communist Party of Finland as lackey of Hitler. What was obvious, was that this many times smaller than the May 1st march, undisguised lapuan procession, which literally begged for the hatred of the working class and popular masses of Tampere upon itself, couldn’t move through the main streets of the city centre. It could be carried out only by preparing it in secrecy with the state authorities, with heavy police escort, zigzaging via smaller side streets until reaching its destination just a few blocks away. Even so, from the beginning to end, the fascist march received only scorn and anger, as various anti-fascists masses followed it shouting, harassing, and also, according to the nazis’ own documentation, denying its peace to demonstrate with apparently some quite imaginative methods. Also the revolutionaries chased the fascist demonstration, and the police had to keep hurry to fulfill its class task. Despite this hurry, when the police walked the fascists through just one block of the main street (Hämeenkatu) for the more random crowds to see, soon also the red flags with hammer and sickle were raised among them, and also the shout to be heard for innumerable times “no peace to the fascists!” was heard, as well as the shout containing the luminous future perspective “death to the fascism – freedom to the people!”. The passage through even such a short, only a few hundreds of meters long route, and with a route designed to be so advantageous for police maneuvers, nevertheless became so very intense. What became clear even for the most boneheaded hitlerite, was that whatever route the fascists had hoped for originally, that is going through the city centre via main streets, not to even think of telling it to the people beforehand, would have required from the reaction and its machinery of violence much more repression, more white terror. Much more, which in turn will only make their own end even more miserable. 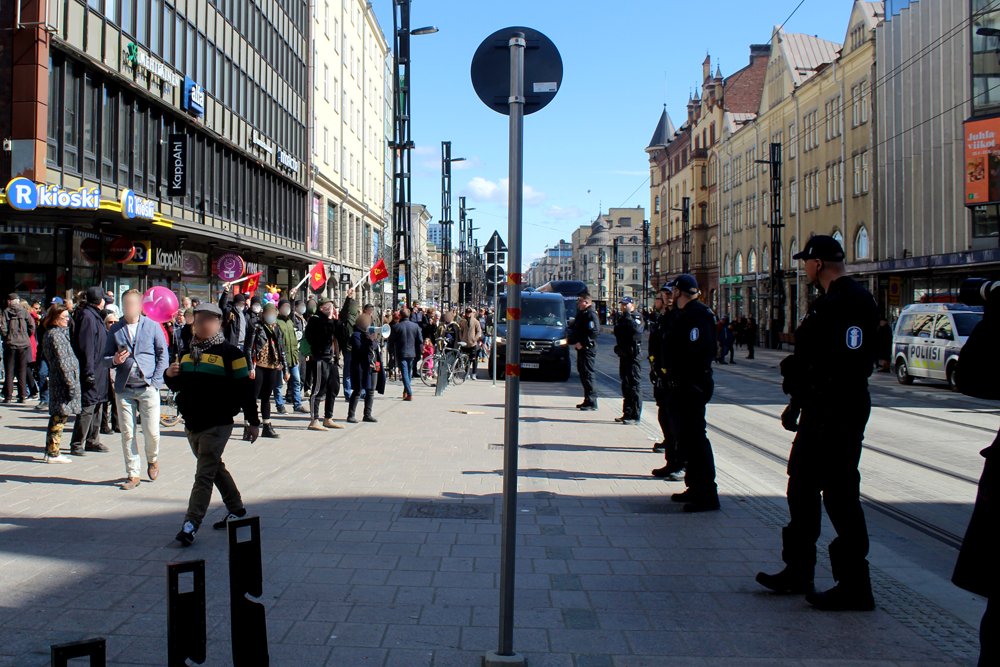 The fascist march ended up in the park of Hämeenpuisto, in front of the Labour House (same where Lenin and Stalin first met), and also the revolutionaries arrived there with their red flags and banners, as well as other antifascists. As the shouts overflowing with justified hate started again paced with the megaphone, the reaction, as it was conducting the fascist illegality, didn’t settle for only defending its provocation in the form of the “White 1st of May”, but instead attacked openly with its police forces. By doing so, it shifted the default main contradiction in the situation from between the anti-fascists and the “blue-blacks” to between the anti-fascists and the police, which only underlined the interrelation between the state machinery and the fascism. 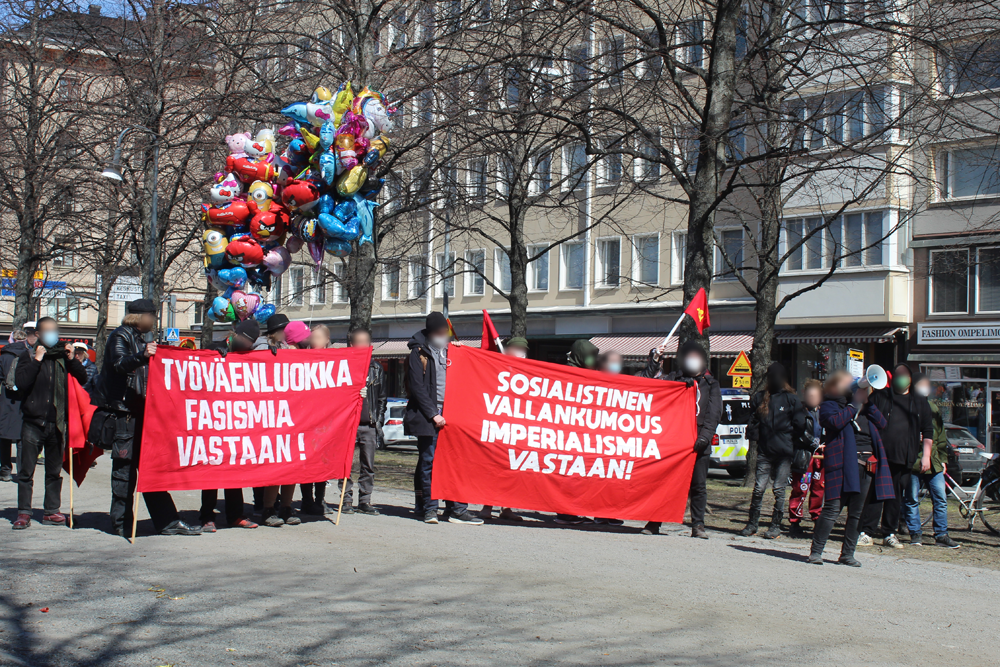 As the “blue-blacks” were about to start holding speeches, the police, threatening with arrests, ordered the group of anti-fascists to silence, who were standing in front of the row of police who had the “blue-blacks” behind their backs some ten or twenty metres away from the anti-fascists. As this fascist ultimatum was not obeyed, the police attempted to capture the megaphonist and laid their hands also on other protesters, stomping on a banner and robbing the megaphone. However, this blue-black assault of the police was met with resistance and determination harder than the assault, which made the police to temporarily abandon its arrest attempts. And what’s even more, through a moment of surprise, the police even lost the megaphone back to the anti-fascists. After stumbling in its own arrogance and losing its mask in the direct view of all kinds of people, the police then, being frustrated, attempted to appeal to some kind of abominable “agreement” that it claimed. According to this “agreement” fantasized by the police, which would be absurd even as an idea, these anti-fascists had supposedly promised to be submissively at another park (Näsinpuisto) one kilometre away! To this the police received the correct answer, that nothing had been agreed with them on anything.

We also received a link to a video, which has documented the above described police attack as well as the variously worded lie of an “agreement” to leave the fascist demonstration in peace:

The protesting was continued still for a short while, but as a part of the police started to maneuver behind and an encirclement was forming up, the revolutionaries and other antifascists present withdrew. So, a successful combative action was carried out with revolutionary leadership in order to deny the fascists’ demonstration peace, arrests and even material losses were prevented, comrades and material were liberated from the cops’ claws. That is a clear victory! The fascists had intended the “White 1st of May” to become a tradition recurring each next year, but its destiny became sealed at its premiere. The “blue-blacks” conspiring with the police are condemned to always evade the workers’ May Day in Tampere, receiving upon itself only the ever heavier fury of the masses. 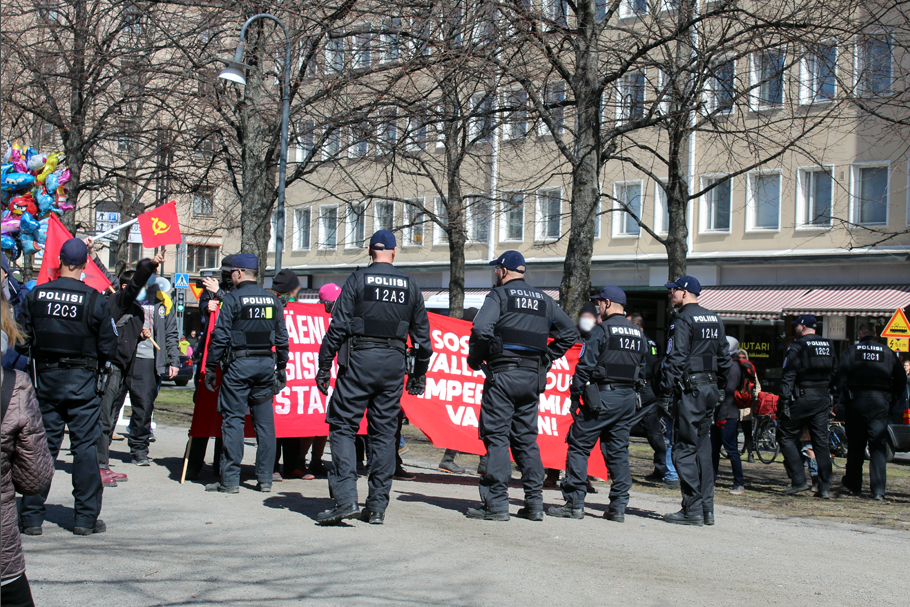 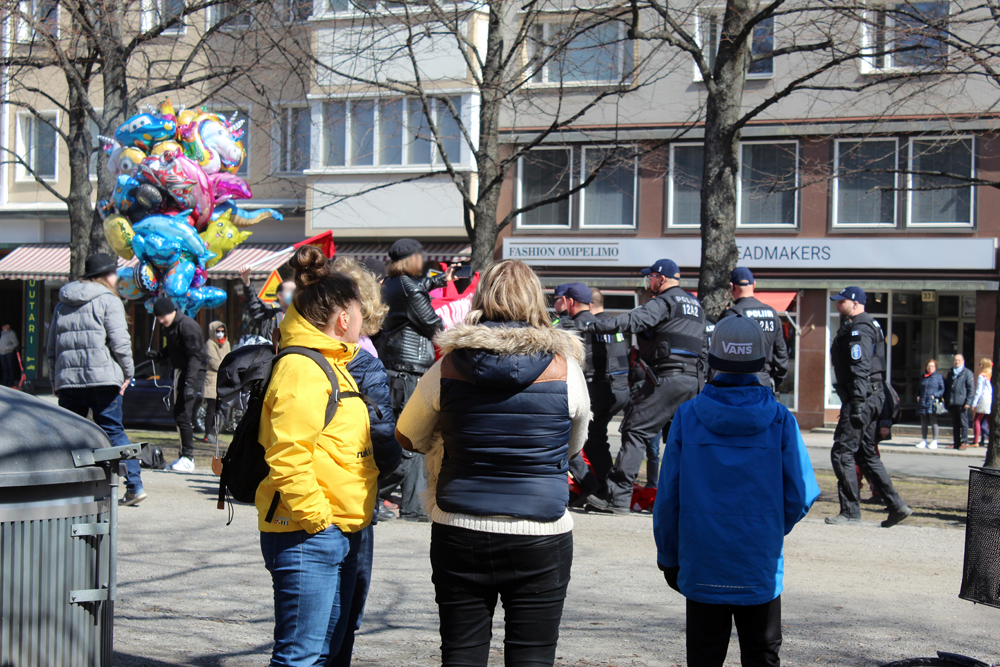 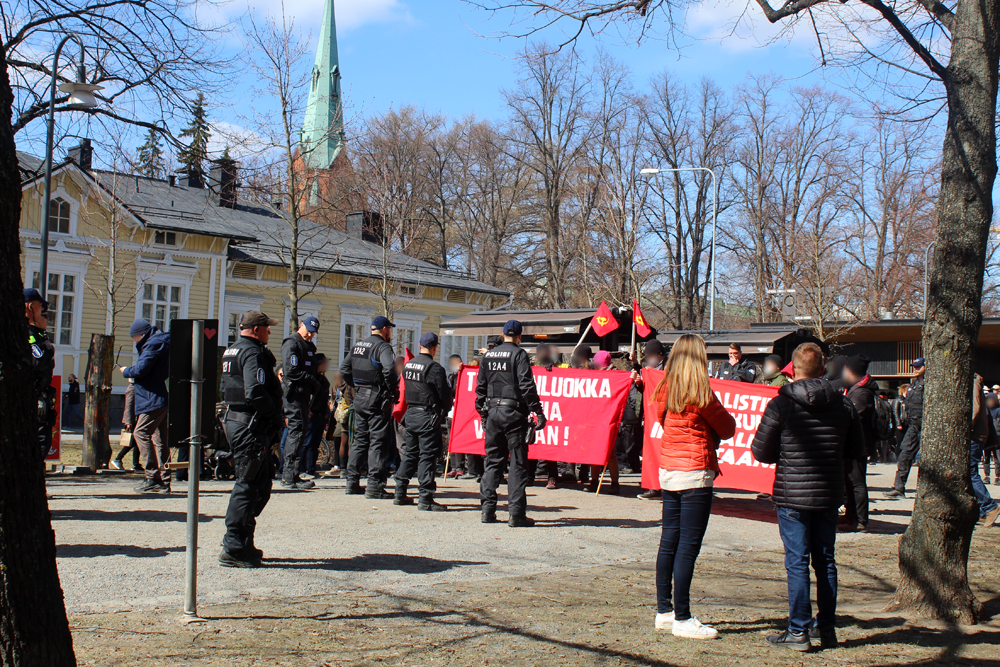 Thus on the year 2022, the international day of the proletariat was carried out in Tampere with its full meaning, culminating in the red bloc of the May Day march and in struggle side by side with masses. The 1st of May remains red!

Correction, May 6: an inexact definition of the victory was corrected