The International Day of the Proletariat in Finland 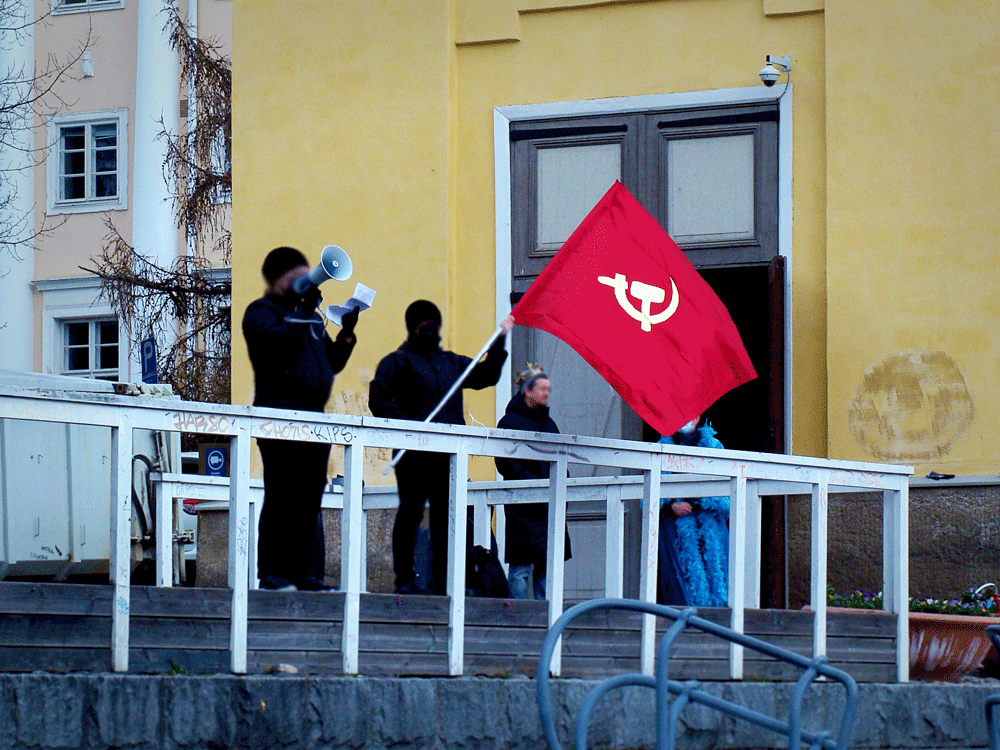 At the dawn of the International Day of the Proletariat, there were many posters seen in the streets that were spread over the past week. According to our knowledge, the only demonstration held in Tampere was by revolutionaries without prior notice. A speech was given, and it gained the attention of people passing by as audience, some of who expressed support to the speech. The speech rejected opportunist ”Virtual May Day” as a betrayal of the International Day of the Proletariat, it explained the current crisis of imperialism and the world situation and Finnish imperialism. Also, it highlighted the ever growing prospects of the world proletarian revolution and the revolutionary peasant movement in Brazil.

We repeat a part from the Speech that was given in Tampere:

”For as long as we can remember, they (opportunists) have marched humbly under the bourgeoisie bearing its flag. Against this, the revolutionaries in all countries prioritize proletarian internationalism uniting under the red flag. Would we abandon our class by the order of the reaction or because our Finnish class sisters and brothers are still lacking courage? No, we reject ”truce” and want to encourage by showing the way for the struggles of the future. Even though we are seemingly alone here at Central Square, in a world scale we unite with millions and millions.” 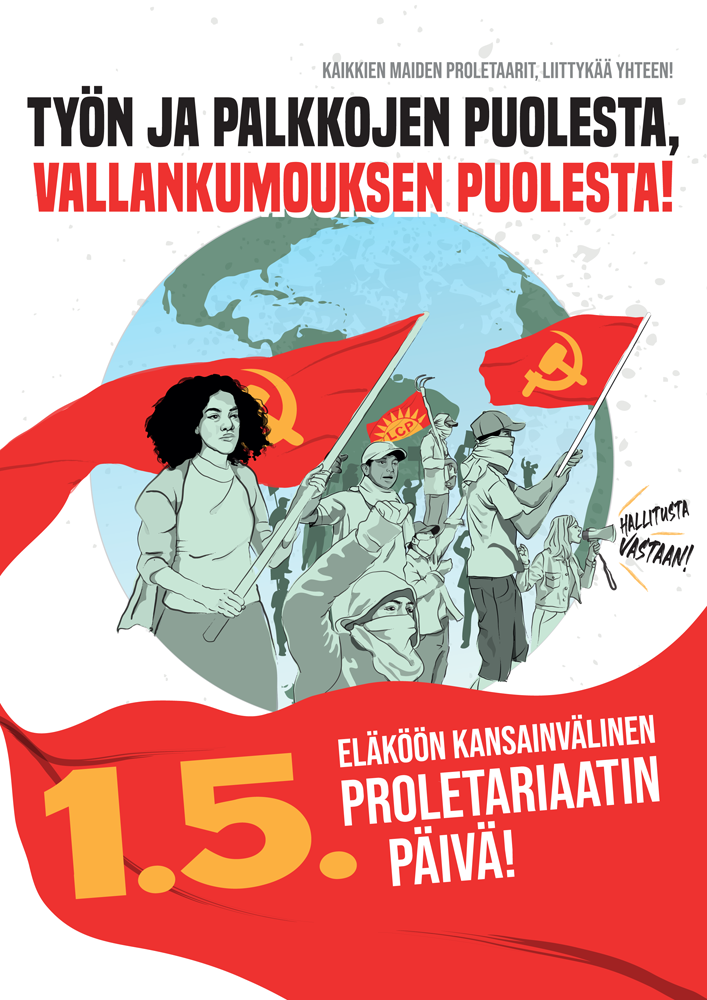 Thus was demonstrated the difference of the revolutionary line in contrast to the capitulation lead by the official “left” of the old state that sits in the government, with which the “extra-parliamentary left” and “anti-authoritarian movement” in Finland have joined with a rare totality by international standards. Clearly, the government of imperialist Finland and its ”critical” tailers have a dark relationship, which corresponds to this year’s statement made by the International Communist Movement, which states that opportunism close ranks with the old states.

For example in Tampere, not even the most ”radical” opportunism showed any life signs to the masses as May Day got closer. When multicolored flags of opportunism were kept hidden under the blue and white cross flag of the old state the red flag of hammer and sickle was held alone against them. 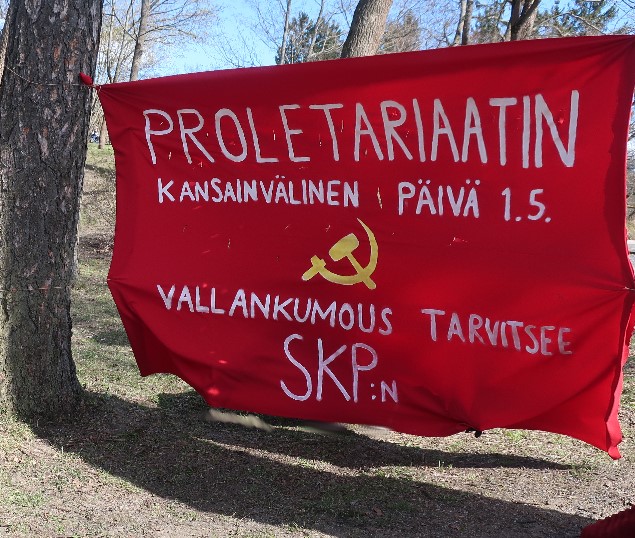 Revolutionaries gathered at the Market Square in Turku on the International Day of the Proletariat. A speech was given, which highlighted the strategic offensive of the world revolution and the bright future of the revolutionary movement, while reaction and imperialism are slowly dying in their incurable deepening crisis. The bloc held a sign and red flags, that demanded the reconstitution of a revolutionary organisation of the proletariat. The mobilization was conspicuous and it gathered over twenty listeners despite the restriction that bans meetings of over 6 people. After the speech the bloc marched to Vartiovuori Park while shouting slogans like, ”No elections, revolution yes!”, ” Long live May Day!”, and ” Party, Army, Front- the key to our victory!”. The March got plenty of attention and surprised reactions. Also, there were plenty of fruitful conversations with the masses. 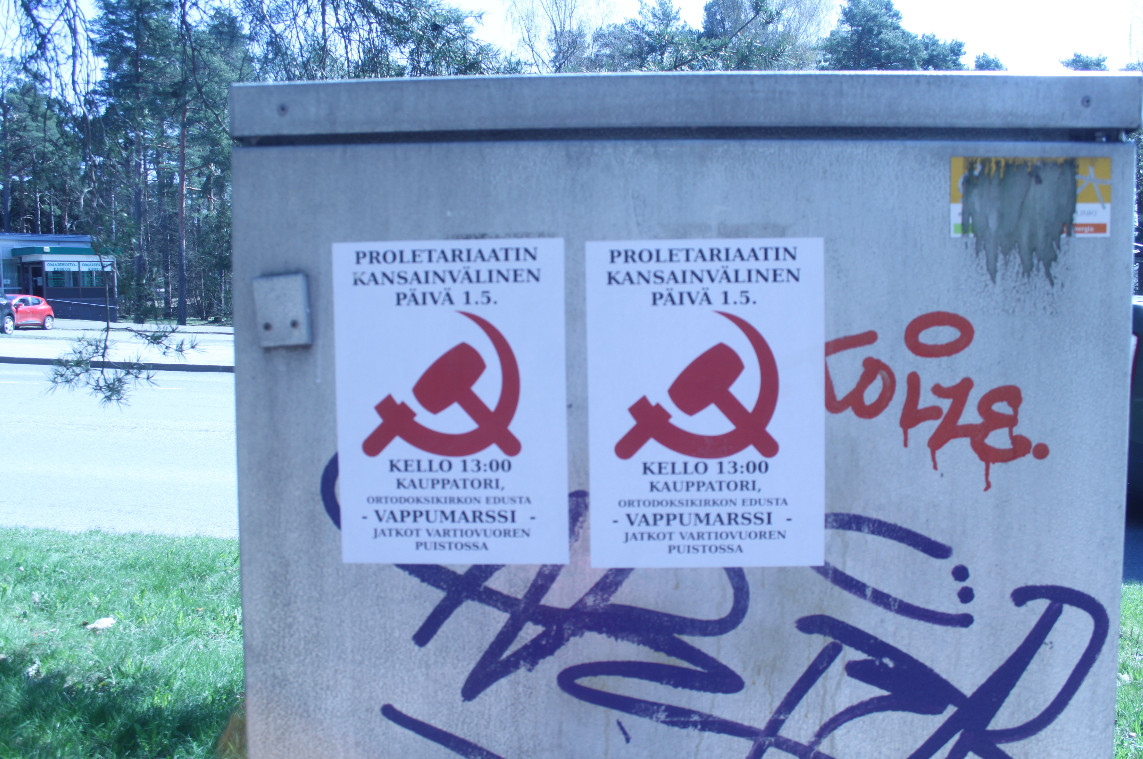 The mobilisation was a bright example of the uneven progress of revolutionary situation, because again, the traditional May Day marches were canceled also in Turku, and all kinds of opportunists and revisionists decided to stay inside respecting the order of the government of the bourgeoisie state- So be it! Only the Marxist-Leninist-Maoists marched in Turku on the Day of the International Proletariat showing that our ideology is the only and right one and is against capitulation in every situation, and which upholds a justified slogan: ”It’s right to rebel!”. That we are marching the same front with the oppressed people and the international proletariat.

The Day of the International Proletariat is a day of struggle, a day in which are weighted the balance of power between revolution and counter-revolution, a day that calls us to the streets and to great initiative. 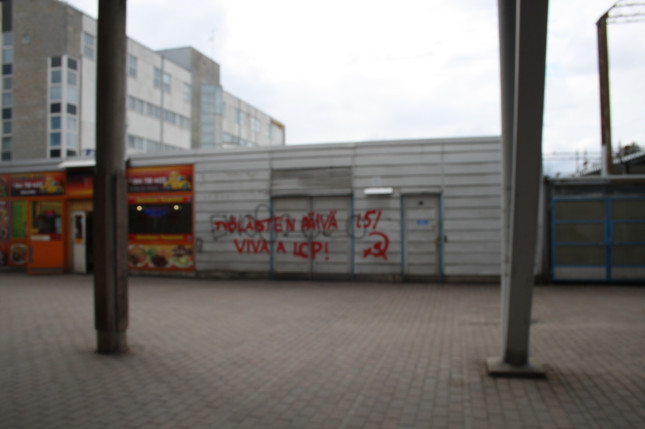